Investors were rewarded in November as several stock indices provided double-digit monthly returns.  Two stories in particular seemed to have driven the stock market surge; significant progress toward COVID-19 vaccinations and the diminishing uncertainty related to the US Presidential election outcome.  The S&P 500 gained 11% during the month, with value stocks and more economically sensitive cyclical sectors outperforming the growth and technology-oriented names that led through much of the year.  US large cap value stocks returned 14% and small cap and foreign equities returned 18% and 16%, respectively[1].

The election of Joe Biden as the next President of the United States became more certain during the month after an extended process of counting mail-in ballots in swing states as well as subsequent legal challenges from President Trump’s team.  The Electoral College is set to meet and vote on December 14, marking the next step on the path to Inauguration Day.

In the race for a COVID-19 vaccine, three companies (Pfizer, Moderna, and AstraZeneca) have recently completed trials of their vaccines.  The initial results surprised to the upside, as the Pfizer and Moderna vaccines reporting 95% efficacy, and those companies are expected to seek FDA emergency approval in the weeks to come.  Markets applauded the news, hoping that life may return to pre-pandemic normal in 2021. 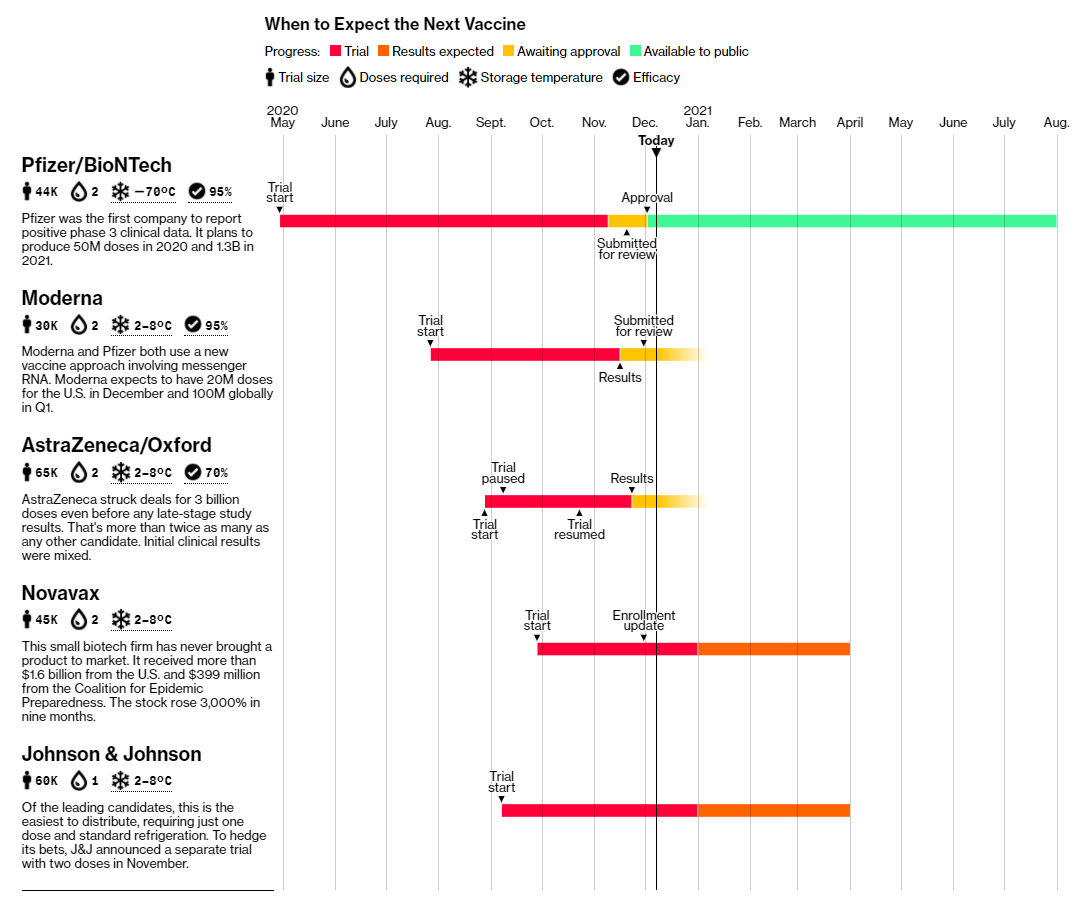 Despite progress toward a vaccine, the pandemic continues to rage on in the US.  Late November and early December saw record numbers of new cases and hospitalizations, with hospital systems in some states nearing bed capacity.

For many, it is increasingly difficult to process the sharp contrast between how grim the real-life situation is today versus the optimism surrounding the upcoming distribution of a vaccine.  Assuming the vaccines prove effective and the logistical challenges with distribution can be solved, the light at the end of the tunnel appears to be getting closer. 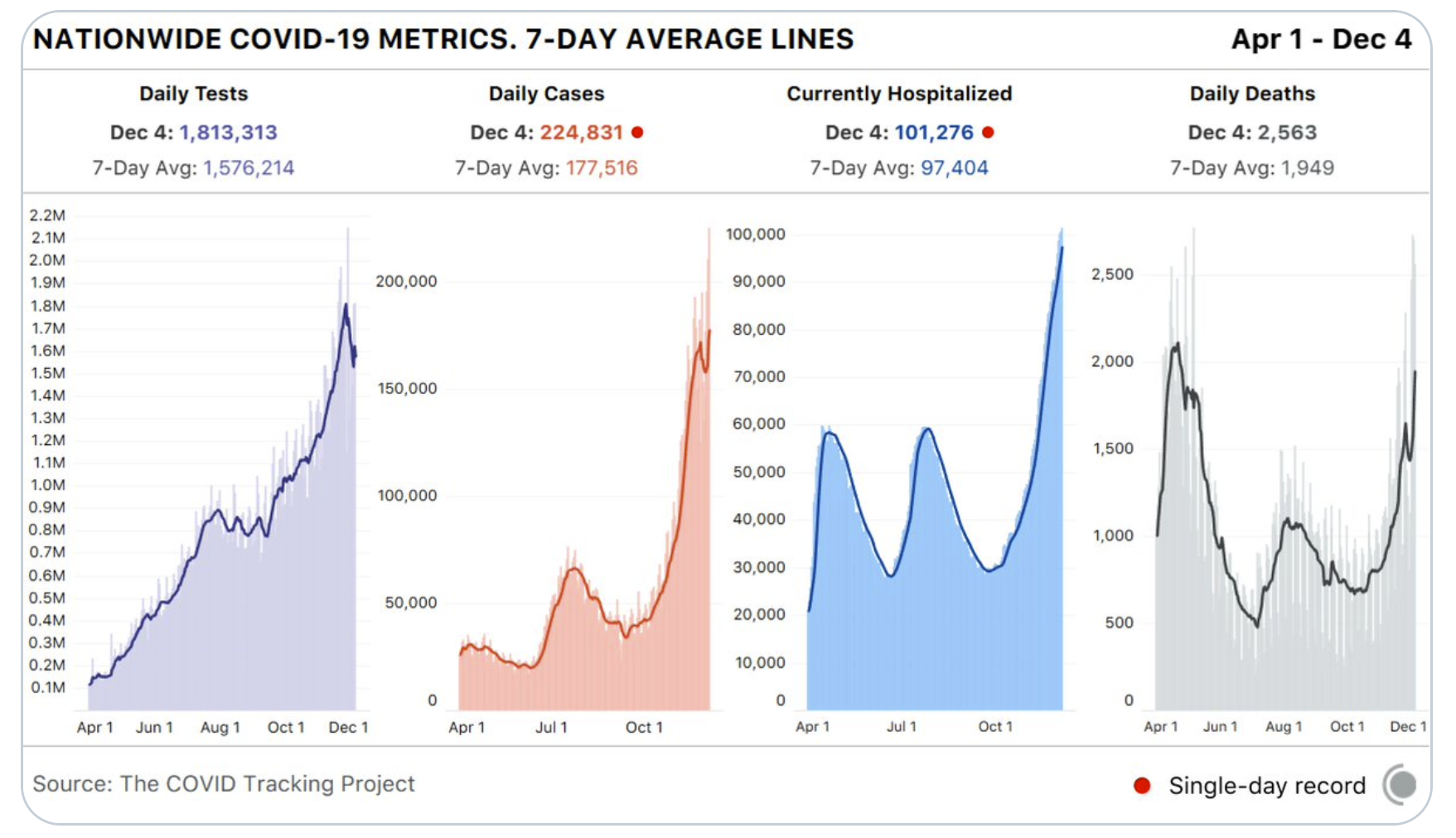 Third quarter earnings for the S&P 500 generally beat expectations, with more than 85% of companies outperforming analysts’ consensus estimates, and earnings were nearly 20% above expectations, on average[2].  Looking forward, the expectation is for the S&P 500 to earn approximately $169 per share in 2021, which would mark a 22% increase in earnings over 2020 and a 4% increase in 2019 earnings that occurred prior to the pandemic.  As of November 30, the S&P 500 index level was 3,622, which implies that investors are paying 21x next year’s expected earnings. 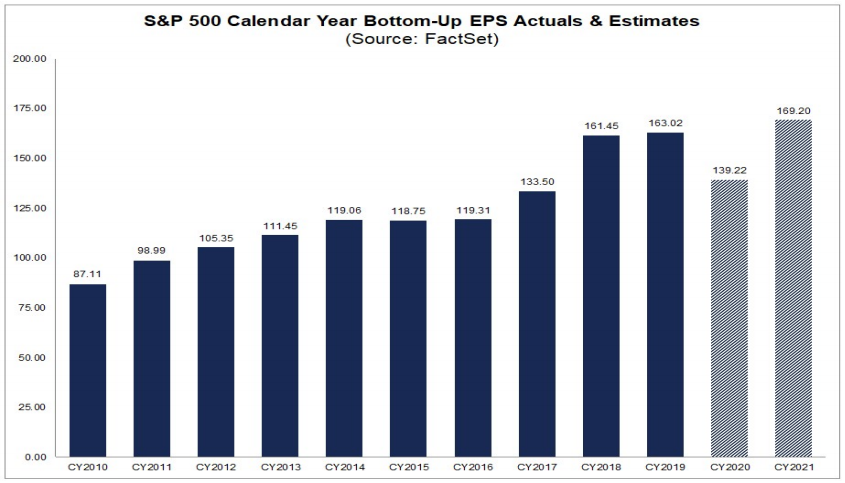 In early December, U.S. Bureau of Labor Statistics released the November employment report.  Economists were anticipating that the US economy added approximately 450,000 jobs during the month, but the actual number was only 245,000.  The total number of those employed in the US remains significantly below the pre-pandemic peak in January of 2020.  The headline unemployment rate remained relatively unchanged at 6.8%, but the total unemployment rate (when accounting for those who are part-time for economic reasons) was more than 12% of the labor force as of November. These levels are nearly twice as high as those from January, though significantly lower than the nearly 23% rate at the height of the stay-at-home orders in April. 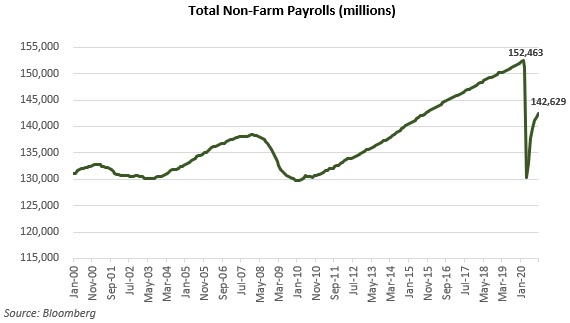 The chart below highlights the valuation of large cap US equities as measured by the S&P 500 index, which may be moderately overextended relative to historical averages.  Today, markets are at a potential inflection point with economic and human suffering from the pandemic juxtaposed against the prospect for a cure on the horizon as well as significant levels of fiscal and monetary stimulus.

Given the unprecedented nature of the current situation, many traditional measures of valuation may not be as meaningful in an extended environment of zero interest rates.  Market participants seem to be looking beyond 2020 earnings and are willing to pay a higher multiple for growth in the recovery years. 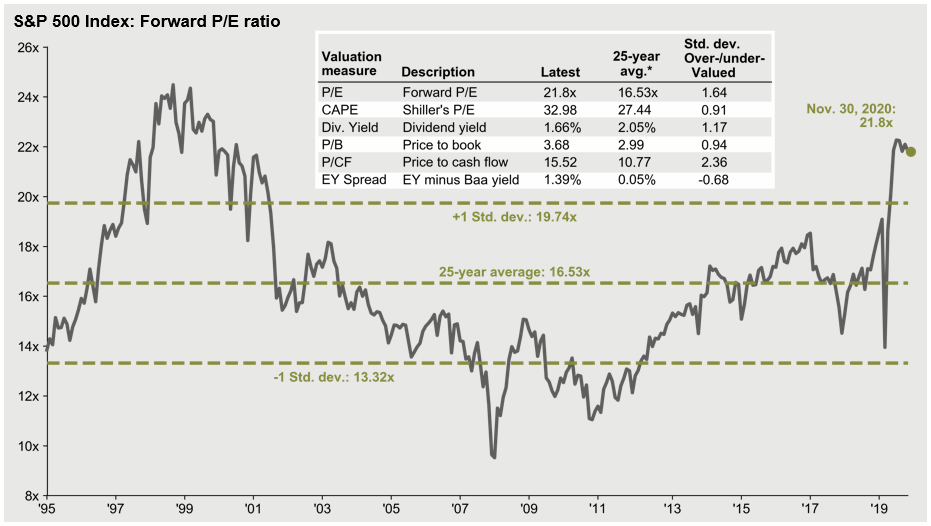