Risk assets generally fell in October as hopes for additional stimulus before the election faded and investors saw a resurgence of COVID-19 cases in many parts of the world.  The S&P 500 lost 2.7% during the month resulting in a 2.8% gain year-to-date[1].

Tomorrow is the US Presidential Election, and hopefully we will have a clear outcome that evening or shortly thereafter.  As of this writing, Democratic candidate, Joe Biden, remains the favorite in many polls and swing states, but, as we witnessed in 2016, anything can happen.  Investors have been increasingly considering the implications of a Democrat-controlled White House and Congress and the potential for a large fiscal stimulus to combat the impacts of the COVID-19 recession.

It is important for long-term investors to take a step back from what has been an extremely contentious race and realize that the US economy and companies have continued to grow and prosper largely regardless of who is President or which party controls government.  The chart below highlights the potential shortfall of only being invested when one party or the other occupies the White House. 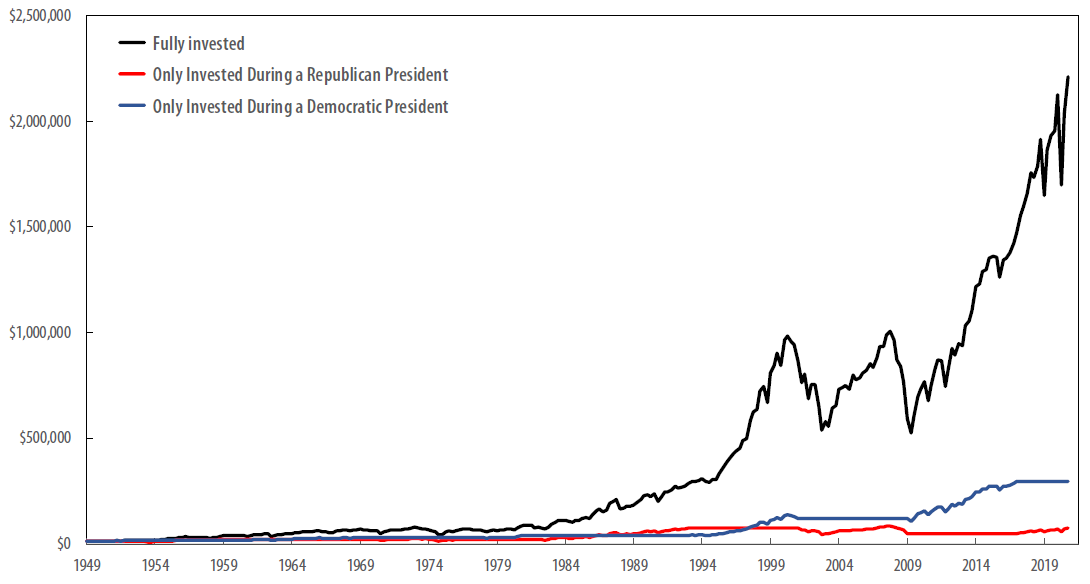 The COVID-19 pandemic continues to drag on.  While new confirmed cases have risen to record levels in the US, the number of fatalities has remained relatively steady.  Currently, hospitals are not being overwhelmed as they were in the early days of the virus.  This may be due to our healthcare system better understanding how to treat the virus.

British Prime Minister, Boris Johnson, announced last week that the country would go under a renewed four-week stay-at-home order in an effort to stamp out the virus’s most recent surge ahead of the holiday season.  Citizens will still be allowed to leave their homes for education, essential shopping, outdoor exercise, and to care for others.  Similar restrictions are being implemented in other European countries that are experiencing a similar surge in cases. 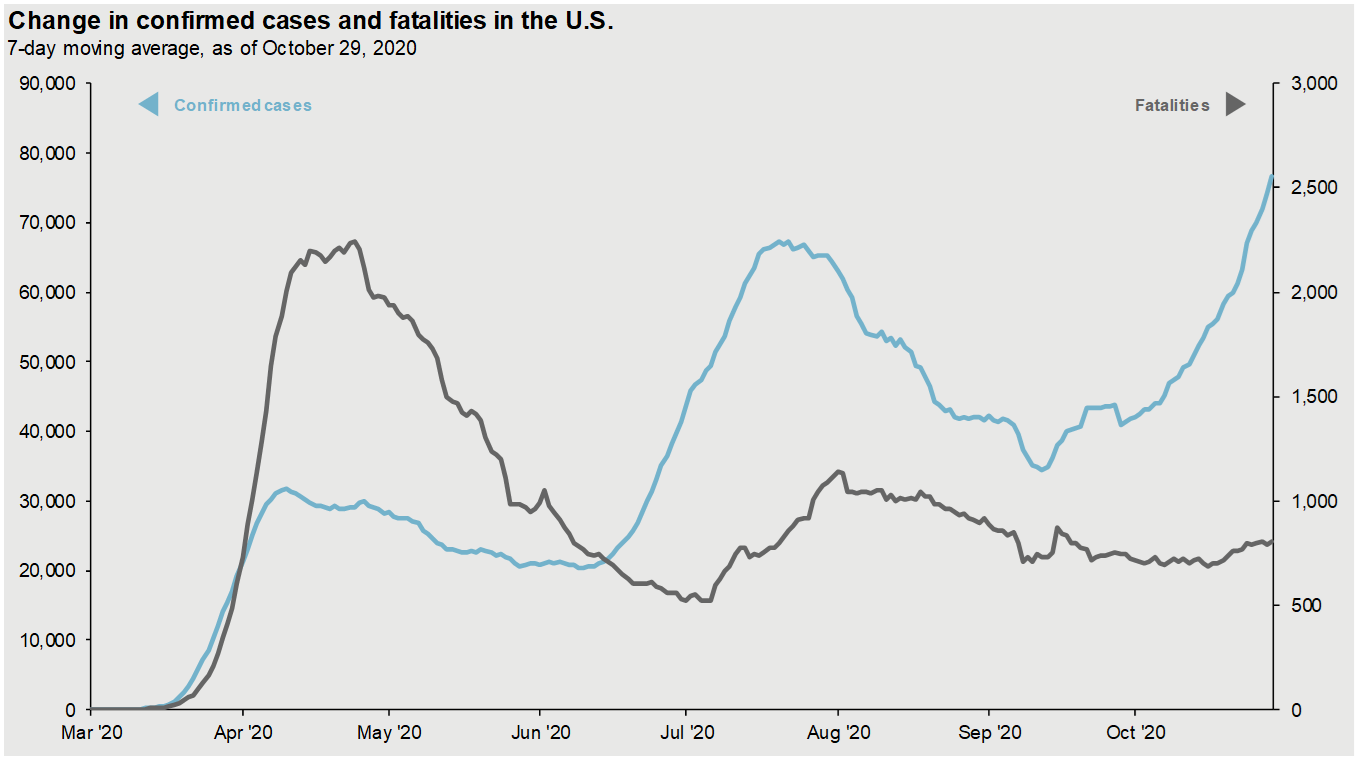 As of this writing, 64% of S&P 500 companies have reported results for the third quarter of 2020.  Of those, 86% have outperformed analysts’ consensus expectations for earnings and 81% have outperformed revenue expectations.  Because of these better-than-expected results, earnings for the third quarter are now down just 9.8% compared to last year as opposed to the 21% decline in year-over-year quarterly earnings that was expected at the end of September.  Looking forward, calendar year 2021 earnings for the S&P 500 are expected to be $167 per share (approximately the same as 2019’s $163 per share), which puts the S&P 500 index trading at 20x anticipated 2021 earnings[2]. 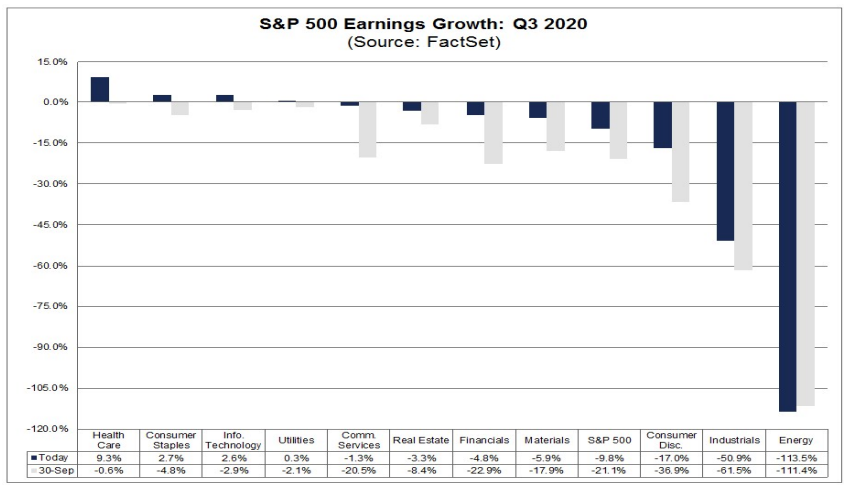 The US economy advanced 7.4% over the previous quarter in Q3, but the aggregate product of the United States remains lower than a year ago due to the impact of the COVID-19 pandemic and resulting recession (approximately 3.5% smaller than last year).  The number of workers filing new claims for unemployment insurance fell to 751,000 last week, which is one of the lowest numbers since March, though still significantly elevated.  As of the week ending October 17, continuing claims for unemployment insurance in the US was 7.8 million which is still larger than even the worst period during the 2008-2009 financial crisis, but down from the all-time high in May of 24.9 million[3].  The economy remains on a recovery path, but the pace of the recovery, and who gets to participate, is still being determined. 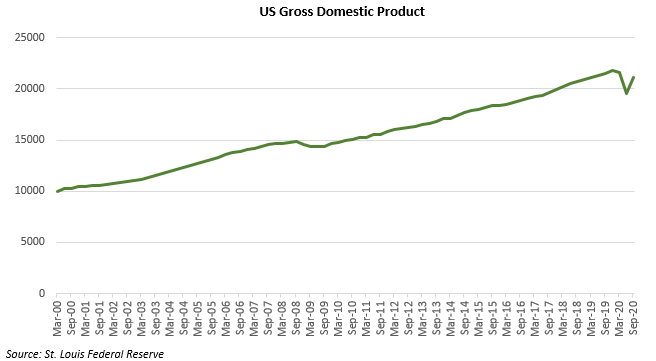 The chart below highlights the valuation of large cap US equities as measured by the S&P 500 index.  This chart implies that the index may be modestly over-extended.  However, given that we have entered an unprecedented period of global fiscal and monetary stimulus, many traditional measures of valuation may not be as meaningful in an extended environment of zero interest rates.

Market participants seem to be looking beyond 2020 earnings and are willing to pay a higher multiple for growth in the recovery years.  Regardless of the result of the election, a large fiscal stimulus package in the not-so-distant future may provide a short-term boost for the economy and value stocks, though the impact of the COVID-19 pandemic will continue to weigh on the recovery.  Ultimately, we do not anticipate a full recovery to occur until the threat of the pandemic recedes with the widespread availability of a vaccine and/or herd immunity.