US equity markets, as measured by the S&P 500 index, advanced more than 2% last week as investors continued to track the economic recovery and second quarter corporate earnings.  Last Friday, the US Bureau of Labor Statistics reported that 1.76 million jobs were added back to the US economy in July, which brought the headline unemployment rate down to 10.2% from a peak of 14.7% in April, but significantly higher than the 3.5% rate in February prior to the COVID-19 pandemic’s impact on the US.  In May, June and July, the US economy has added back 9.3 million jobs after losing 22.2 million jobs in March and April during the peak of the virus containment efforts (significant business closures, stay-at-home orders). 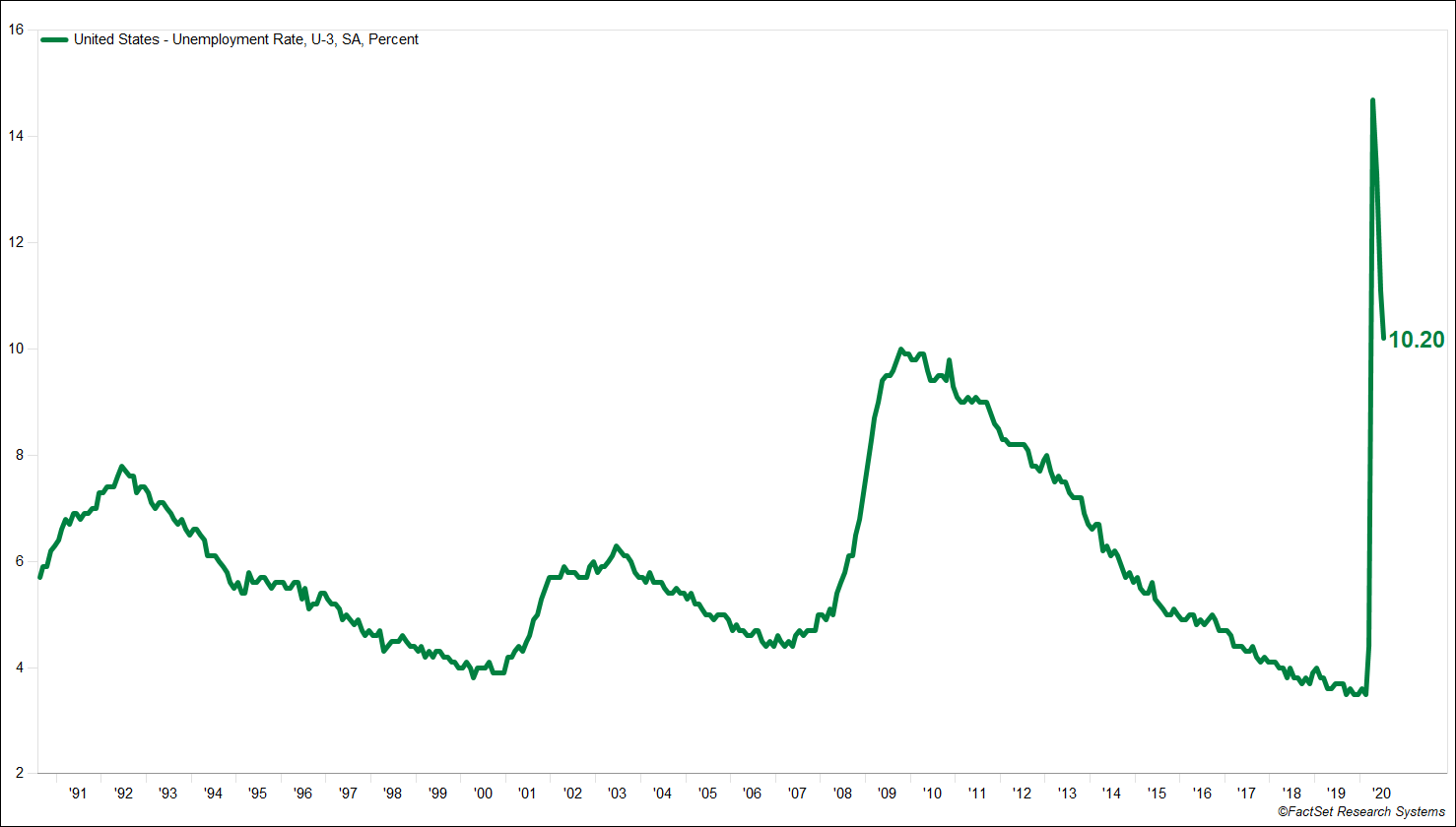 The U-6 measure of unemployment, which is considered more comprehensive than the headline (U-3) measure given that it includes workers that are part-time or underemployed for economic reasons, was 16.5% in July, down from 22.8% in April, but up from 7.0% in February.  These figures may also be positively skewed by the fact that approximately 5 million people have left the US labor force since February (they stopped looking for work).  As the recovery continues, workers may re-enter the labor force, potentially slowing reductions in the unemployment rates.  The employment-to-population ratio was 55% in July, up from 51% in April, but down from 61% in February.  This ratio is calculated as those individuals 16 years and older, who are actively participating in the labor force excluding military personnel and federal government employees, divided by the total civilian non-institutional population (all non-military or federal government employees).

Earnings season has continued to positively surprise investors and analysts.  As of last Friday, 89% of S&P 500 companies have reported actual results for the second quarter with 83% of those posting earnings that exceeded analysts’ consensus expectations.  In aggregate, S&P 500 companies reported earnings that were 22% above analysts’ estimates.  Actual revenue results have also surprised to the upside, with 64% of companies beating expectations.  The quarter began with analysts expecting a year-over-year decline in second quarter earnings for the S&P 500 index of -44%, and as of last Friday the second quarter’s decline is expected to be only -34%.  While a -34% decline is, of course, a significant decline (the worst since 2009), the quarter’s results are better than expectations several weeks ago, which has likely contributed to the continued rally in US equities.  Looking forward, analysts expect year-over-year earnings declines for the third and fourth quarter of -23% and -13%, respectively, and year-over-year earnings growth in the first quarter of 2021 of 13%.

Source: All return and economic data provided by FactSet