Equity markets declined last week with the S&P 500 losing nearly three percent as evidence of increasing cases of the COVID-19 virus in parts of the United States.  The increased cases caused concern that the economy may not be able to rebound as quickly as might have been implied by the stock market recovery that began in late March.  Much of last week’s decline occurred on Friday after a record number of new COVID-19 cases in the US were reported on Thursday (39,972) and Friday (45,255) according to data from Johns Hopkins University, with most of the new cases coming from Florida, Texas, California, and Arizona.  Perhaps most concerning for investors is that states such as Florida and Texas took steps to pause their economic reopening plans and closed bars; an ominous sign as employment and consumer spending data was beginning to show signs of recovery.[1] 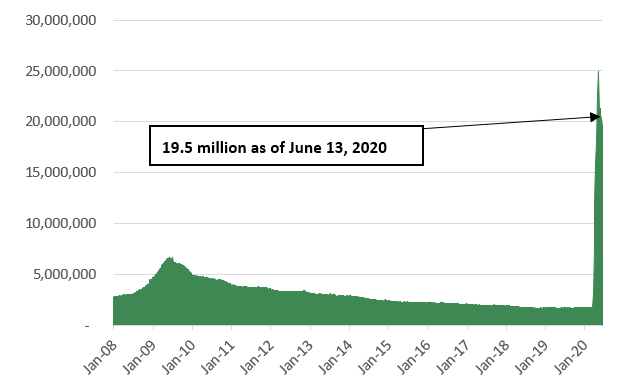 Last week, an additional 1.5 million Americans filed initial claims for unemployment insurance.  While the number of claims is staggering, it has been falling each week for the past few months.  Additionally, continuing claims for unemployment insurance have also been falling.  Last week, continued claims fell to 19.5 million, down from 20.3 million the previous week (Chart 1), which may imply that there is a trend toward net rehiring of workers, despite the large number of new unemployment claims each week.  A provision in the CARES Act, which provides an additional $600 per week in support of state unemployment insurance from the federal government to those out of work, is set to expire in July.  It will be important to track the impact on rehiring of workers as well as household debt service if this benefit is not extended in any new stimulus bills currently in discussion in Congress.